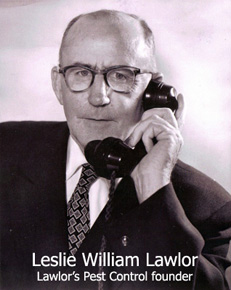 Leslie William Lawlor was a Health Inspector with a Metropolitan Council in the 1930's. His work led him to study control of pests, such as rats/mice and cockroaches, and assist owners of food processing premises and home owners with advice as to how best to control them and ensure requires standards of hygiene. He became well known in his field, and soon private business owners such as large retail stores were seeking his advice and offering to employ him to take care of their pest problems.

In 1938 this extra part time work outside his job as a Health Inspector had reached a level of demand sufficient for him to resign from his position with the Council and work full time for himself in Pest Control. Leslie, took a special interest in the control of termites, or as they were then known, white ants, and was soon being referred to as "The White Ant Man".

As the business prospered, Leslie trained other family members to join him, and the business became very well known as "The White Ant People".

Leslie was from the old school with a strong belief in the Old values, such as sealing a deal with a hand shake, a man's word is his bond. If you say you will do something, then you do it, treat your fellow man as you would like to be treated, were ideas he taught to his children and practiced in business.

There are now 3 generations of Lawlor Family members employed in Lawlor Pest Control Pty Ltd, and they are supported by some of the best Administration Staff and Technicians in the Industry.

Lawlor's premises today at 157 Marion Roach, Richmond Operating from modern efficient premises at Marion Road, Richmond, and with Technicians in all suburbs. The Company provides the latest in equipment, materials, and treatment to protect your home and your family.

The old-fashioned values passed down by our founder, Leslie William Lawlor, are still at the heart of our business. Our satisfied customer's testimonials are testament to our  commitment to these values.

You can Trust Lawlors, we will be there to put "it right" in the future. 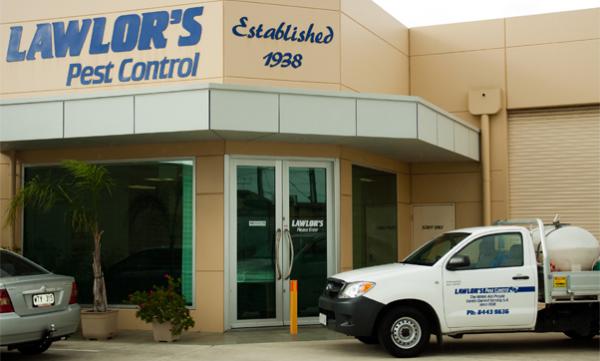 Learn more with a visit to our FAQ page